As soon as you are active in certain specialist circles or subject areas, certain buzzwords come up again and again. Currently, terms like “digitalization”, „digitization“, “industry 4.0”, “data mining” or “artificial intelligence” are popular. However, even if much of this is difficult to grasp for outsiders, individual parts are already finding their way into new developments and associated regulatory issues. For this reason, we would like to devote ourselves to this topic in a joint series with Dominik Kowalski, IEC member and the “Institute for Intelligent Cyber-Physical Systems (ICPS)” at Heilbronn University of Applied Sciences.

Artificial Intelligence-What is it actually?

In the first part of this series, we would like to approach a common understanding of the term “artificial intelligence” and show examples of its application.

The marble in the labyrinth – an illustration

Imagine a large, three-dimensional labyrinth with an entrance at the top and an exit at the bottom. Within this labyrinth there are different paths and routes, each of which leads from the entrance to the exit and can also cross each other. Let us now assume that we have coloured marbles with different properties. These differ, for example, in size, weight and material properties. All blue marbles are the same, all yellow ones and also all red ones respectively.

Under this assumption, it could be predicted quite clearly at the beginning which path the respective blue, yellow or red marbles would choose from the entrance to the exit. However, with each additional marble that has rolled through the labyrinth and thus left its mark on the paths, the paths and intersections in the labyrinth could change and a blue marble could in future turn halfway onto the path of the yellow or red marbles. Or take a completely new path in the labyrinth. At the same time, the yellow or red marble could also change its path for various reasons (mutual influence, less friction, repelled corners). However, when this moment occurs and according to which exact criteria this happens is not apparent from the outside. Taking these given conditions into account and only under the influence of its own conditions, the labyrinth finds an independent course to bring all the marbles from the entrance to the exit. The labyrinth is thus the artificial intelligence. 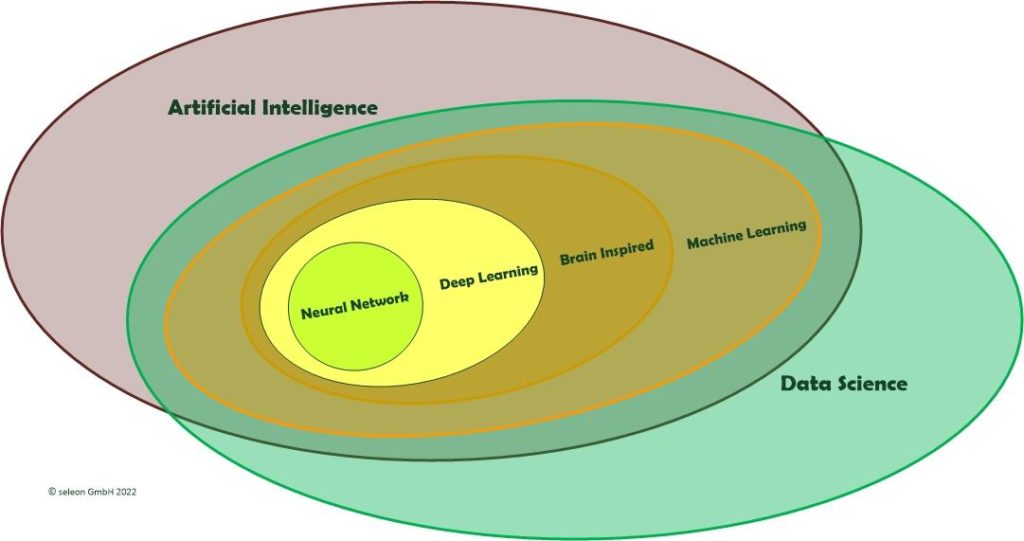 Artificial neural networks are based on the structures of actual neural networks of organisms. Natural nervous systems consist of a multitude of neurons that are connected to each other and exchange information. Together, they can also trigger an action. If we transfer these neurons (also called units or nodes) to the image of the labyrinth, they could be understood as the crossroads or waypoints in the labyrinth, which together influence the passage of the marble.

Machine Learning imposes certain rules on the labyrinth according to which it must act. It is therefore a kind of traffic regulation of the marbles in the labyrinth. If, for example, a blue marble cannot pass through a certain section because of its diameter, this will not be possible even after passing through a large number of marbles. If the yellow marbles have a smaller diameter, passage may be possible for them at any time and thus always an option. Thus, after many trials, the neural network learns that blue marbles can never pass this passage, but yellow marbles can pass at any time. If the labyrinth is also able to enforce a right-of-way rule à la “right before left”, this also results in new patterns for the marbles.

What is the state of the art in medical technology?

A central document that should already be taken into account regardless of the activities of the individual medical technology authorities, is the recently published IMDRF Guidance Document “Machine Learning-enabled Medical Devices—A subset of Artificial Intelligence-enabled Medical Devices: Key Terms and Definitions“. Experiences with other jointly developed concepts such as the STED or the UDI have already shown that IMDRF concepts are implemented globally in a relatively harmonised manner, even if mostly only in the long run.

Central definitions of the IMDRF included in the document are:

This document alone already suggests the area in which medical devices with artificial intelligence will move: Devics that function according to the principle of machine learning. But before we present to you in Parts 2 and 3 the status of the standardisation committees and later also the approval authorities, the question of possible areas of application still arises. For this purpose, we contacted the “Institute for Intelligent Cyber-Physical Systems (ICPS)” at Heilbronn University Applied Sciences to take a closer look at possible ideas or already actual application examples:

Artificial intelligence is being used more and more, especially in imaging diagnostics. In the meantime, intelligent algorithms can identify disease patterns better and significantly faster than well-trained doctors.

The ICPS deals with application-oriented artificial intelligence in industry and medical technology. One example is a research project in which Covid-19 diseases are analysed on the basis of X-ray images of the lungs. The analysis here is based on machine learning algorithms that are applied to the X-ray images. For this purpose, a large number of image files are included in the learning process until finally an independent algorithmic image analysis can be carried out. This method is suitable to support doctors in the initial diagnosis and possibly to exclude other clinical pictures of the lung. Especially in countries that are not well equipped medically, these methods can be used efficiently. An extension of the method to the clinical picture of pulmonary tuberculosis is currently being worked on at the Institute.

Do you now have many questions running through your head about the application of artificial intelligence? Then wait with us for part 4 of the series on “Ethics”.

Please note that all details and listings do not claim to be complete, are without guarantee and are for information purposes only.